skip to main | skip to sidebar
Law of AttractionHo'oponopono 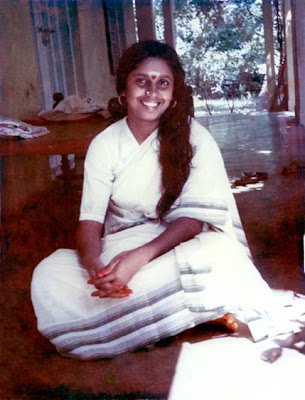 I found a new website dedicated to Mathru Sri Sarada created by some of her Indian devotees that's worth checking out. It's not very well developed yet, but it's a good step for one of the more publicity-shy Gurus out there.

Saradamma, as she is often called, is one of the brightest lights in the Advaitic scene, but also one of its most hidden. She doesn't teach in public, she's never sought a following, and most people have never heard of her. There's only one book out on her, No Mind, I Am The Self, written by David Godman back in the early 1980's, and nothing since. Even that book is fairly thin. Half of it is devoted to her Guru, Lakshmana Swami, at her own insistence. It could use some serious updating, but apparently neither she nor Lakshmana have allowed it. So there's very little information out there about her.

Lakshmana Swami has likewise been a rather reclusive Guru. For long periods of his life he wouldn't teach in pubic either, and that style seems to have rubbed of on Saradamma. She has been his devotee since she was 16 years old, and even though she realized the Self at the age of 20, she never left him to go off on her own. She had no interest in teaching after her realization, and didn't seem interested in staying in the body at all. She's often said that without Lakshmana's efforts to keep her alive, she would have simply have given it up. Instead of teaching devotees, Saradamma simply played with them, literally. She made dolls, and built miniature parks and gardens on Lakshmana's ashram compound, and made that her primary means of relating to devotees. She seemed to consider all human activities futile and pointless, and saw no reason to pretend otherwise. Nevertheless, merely playing with her seemed to purify those around her, even if she behaved nothing like a jnani is supposed to behave. If none of this seemed to be the stuff to build a prestigious spiritual reputation on, it certainly endeared her to those who got to know her.

Over time she gradually took on more responsibility for teaching Lakshmana's students, as he had intended for her. Even so, she never showed much interest in verbal teachings or philosophy. Although Lakshmana was one of the clearest voices in Advaita teaching the practice of Self-enquiry, Saradamma herself never had the slightest interest in it, either before or after her realization. She followed the path of devotion and surrender to her Guru, Lakshmana, and saw no need for any other practice. She certainly acknowledges that for some Self-enquiry is the way, but she has little to say about it. She is more interested in silence than speech, which may be why there is so little written about her. Her main teaching is about devotion, bhakti, love of the Self. As she says in Godman's book about how she functions as Guru:

“I am just a mirror that reflects and magnifies what is going on around me. If people are a little angry with me then I am very angry with them. If people give me a little love, then a great flow of love goes back in return. It is not ordinary love, it is the power of the Self; whoever receives it is purified by it. When a devotee thinks of me in a loving way I am immediately aware of it, distance does not matter. I do not choose whom to love or how much love to give. The amount of love I send out depends entirely on the amount of love I am given. Ramana Maharshi once said that the grace of the Self is like an infinite ocean. If you approach the ocean with a cup, you can only take away a cupful; if you approach it with a bucket, you can only take away a bucketful. This is exactly how it is with me. I am willing to give my full love to anyone who wants it, but the devotee must initiate the process by loving me first. The Self does not choose whom to love; it only gives love to those who love it.

“It is the nature of the Self that it always gives more love than it receives. Sometimes, giving so much love causes a weakness in the body. At times I have found myself saying, “Arunachula, why do you make me love this person?”, but I cannot stop the flow. If a devotee really loves me then that love causes the grace of the Self to flow.

“It is my nature to love. I am love itself. I am overflowing with love and I want to give it all the time. I cannot stop myself from giving this love. Swamy sometimes tells me to be careful; he says that devotees who tell me that they love me this year may have completely forgotten me by the following year. I know from my own experience that this is true, but even with Swamy's words “Be careful” ringing in my ears, I cannot stop the love from flowing.”

There's something truly wonderful about this woman, and I think people should give her the attention she deserves. Her point about loving the Self seems apt for all of us. If we want the Grace of the Self, it stands to reason that we need to love the Self. We shouldn't imagine that self-enquiry is anything other than loving attention to the Self, or we risk missing the point entirely.

I'll try and post more about Saradamma in the future. Anyone who is interested can order Godman's book about her from the link above.
Posted by Broken Yogi at 8:40 PM

What a beautiful way of being. Can life have any more meaning that what this lady is trying to express?

Follow this link to Lightmind's "The Broken Yogi Fan Club", a discussion forum dedicated to the topics raised on this blog. For some, this may allow for more coherent interaction than is available by posting comments.